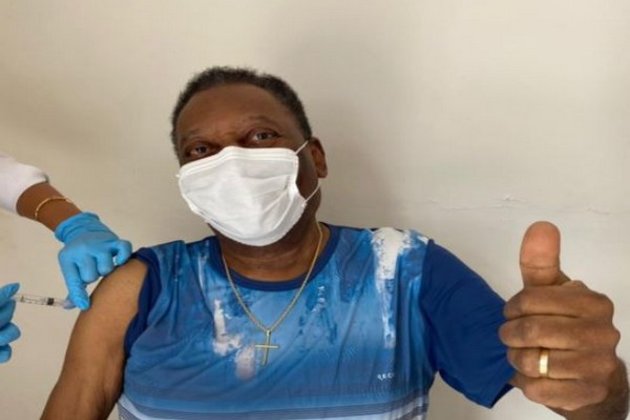 Brasilia [Brazil], March 3 (ANI): Brazilian football legend Pele has got himself vaccinated with the COVID-19 vaccine and has urged people to adhere to social distancing norms.

On Tuesday local time, Pele took to Instagram to post a picture of him receiving the vaccine jab.

"Today is an unforgettable day - I received the vaccine! The pandemic is not over yet. We must keep the discipline to preserve lives until many people have taken the vaccine. Please continue to wash your hands and stay home if possible," Pele wrote as the caption.

"When you go out please don't forget your mask and maintain social distance. This will pass if we can think of others and help each other," he added.

Pele is regarded as one of the greatest players of all time and he was also labelled "the greatest" by FIFA. The former Brazilian star was among the most successful and popular sports figures of the 20th century.

During his playing days, Pele was for a period the best-paid athlete in the world. In 1999, he was voted World Player of the Century by the International Federation of Football History and Statistics (IFFHS) and was one of the two joint winners of the FIFA Player of the Century.

The same year, Pele was named Athlete of the Century by the International Olympic Committee. Pele registered a total of 1,279 goals in 1,363 games, and this is a Guinness World Record. (ANI)